12/15/13 - Santa and his elves made their trek once again through Fanwood.  Yes, they had to delay their visit by one day due to a snow storm, but it was sure worth the wait!  The photos below show him riding around on Engine 7, escorted by the Rescue Squad and Police Department.

and here is a very short video clip

provided to us by Fanwood resident Robert Lacovara!

11/3/13 - A head-on collision between two vehicles occurred at the intersection of North Avenue and Hetfield Avenue during the early evening hours.  A passenger in one of the vehicles was entrapped with serious injuries and the Jaws of Life were used to extricate the victim.  She was then transported by the Fanwood Rescue Squad to University Hospital in Newark for medical treatment.  The driver of the other vehicle was also removed from the scene by ambulance.

10/23/13 - Fire Prevention month is in full swing!  See below for photos of FF Doug Germinder providing a fire safety lecture and demonstration for students at School One. 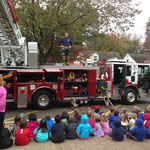 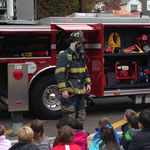 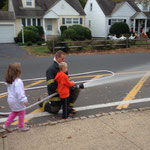 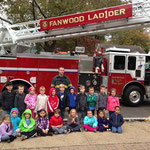 9/22/13 -  Ladder 1 responded on a mutual aid request to Kenilworth for three-alarm house fire.

9/15/13 - During the early afternoon hours, Engine 8 and Ladder 1 responded to a confirmed structure fire on Washington Avenue.  Union County Mutual Aid was notified and assistance was provided at the scene by the Scotch Plains FD, Westfield FD, Berkeley Heights FD and the Cranford FD. Due to the quick response, the main body of fire was confined to the room of origin and extinguished.  Photos of the scene are provided below.

Also, click here for more details on The Patch 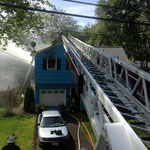 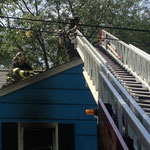 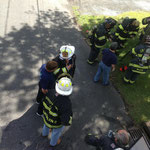 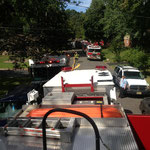 Click on the image to the left to read the Thank You letter from the resident, which was published in the Scotch Plains Fanwood Times.

9/1/13 - At 5:40 AM, the Fire Department was dispatched to a reported structure fire on Madison Avenue.  Upon arrival, heavy smoke was pushing from the " C / D " corner at Divisions 1 and 2.  The first in Engine Company, commanded by Capt. Dietl, made an aggressive attack to Division 1, while Ladder 1, commanded by FF K. Piccola, prepared for roof operations, set up ground ladders and began ventilation.  The Scotch Plains Fire Department was requested to the scene to deploy a second attack line to Division 2.  A second alarm was also transmitted, bringing extra resources and manpower to the scene as well as companies to cover at Fanwood Fire Headquarters. The fire was placed under control at 06:30 hrs. 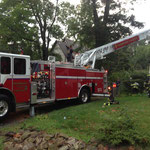 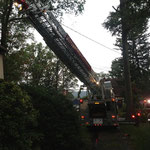 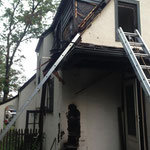 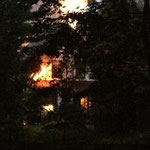 7/12/13 - At 11:30 AM, the Fanwood Fire Department was dispatched to a reported motor vehicle accident involving a car into a house and victims trapped.  Upon arrival, the vehicle was on its roof and into the front of a home on Paterson Road, approximately 150 feet from where the accident began.  The vehicle had apparently lost control at the intersection of Hunter Avenue and Paterson Road, traveled across the corner property’s lawn, jumping over two vehicles in the driveway, then passing over the property of a second home before coming to rest on its roof in the garage and front entryway of a third home.  The crew of Engine 8 immediately stabilized the vehicle, began patient care and removed the vehicle’s doors to extricate the victim.  Plainfield Rescue Company was dispatched to the scene as a precaution for manpower. The driver survived with minor injuries.  No other injuries were reported.  The house sustained severe structural damage.  Some photos and links to news reports are provided below. 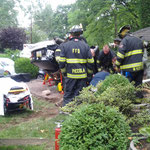 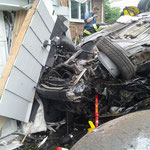 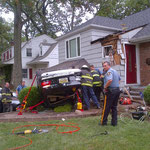 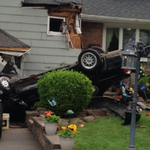 7/8/13 - The Fanwood Fire Department held a vehicle extrication demonstration for the Scotch Plains Junior Police Academy at the Union County Police Academy.  The lecture was conducted by Chief John Piccola.  The practical demonstration was lead by Captain Frank Dietl, and included two members of the Scotch Plains Fire Department, FF Matt Adams and FF Dave Triano.  The students learned about scene and firefighter safety, patient care and stabilization, and basic extrication.  Photos are provided below. 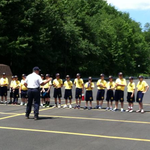 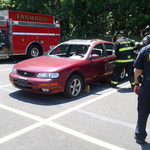 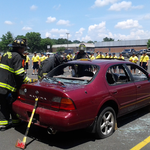 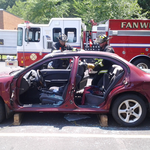 6/30/13 - Members of the Fanwood Fire Department and Fanwood Rescue Squad attended a Somerset Patriots game in support of Rescue Squad member Melissa Padulsky's CPR and First Aid company, Little Hearts Big World, which provides instruction to professionals as well as members of the public.  Despite a rather wet afternoon (with 2 rain delays!), a great time was had by all!  A link to her company's website can be found in our "Useful Linls" section.

6/18/13 - Our two newest firefighters, Anthony Grasso, Jr. and Zach Weissglass, graduated from the Union County Fire Academy during an evening ceremony held at Union County College in Cranford.  Chief Piccola as well as other officers and firefighters were on hand to celebrate their achievement.  Some photos are provided below. 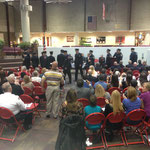 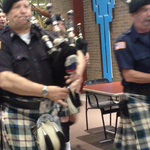 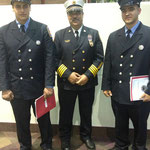 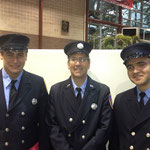 5/6/13 - Due to a medical emergency at a home on Robin Road, it was necessary for the Fanwood Fire and Police Departments to establish a landing zone at Forest Park so that the patient could be transported to a hospital in Pennsylvania.  Dozens of parents and children were cleared from the park.  A photo of the State Police helicopter landing at Forest Park is shown to the left.

4/30/13 - At 22:19 hrs., our department was dispatched to the 100 block of La Grande Avenue to the scene of a motor vehicle accident.  The vehicle struck a tree and then partially rolled over.  Its driver self-extricated with minor injuries.  The crew of Engine 8 provided emergency lighting and stretched a dry hoseline for scene safety while the crew of Ladder 1 secured the vehicle and cleared the damaged tree.  Photos of the scene are below.

4/30/13 - At 12:51 hrs., the Fanwood Fire Department was dispatched to the intersection of North Martine and Midway Avenues for a motor vehicle accident with entrapment.  The crew of Engine 8 and Ladder 1 had the patient extricated and placed on a stretcher by 13:19 hrs.  The driver was treated and transported to the hospital by Union County BLS with non-life threatening injuries.  Photos of the scene are provided below. 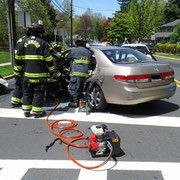 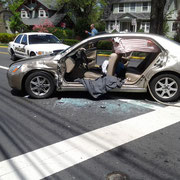 4/23/13 - At approximately 7:40 Am, Engine 8 was dispatched to Hunter Avenue due to a reported overturned vehicle.  The victim self-extricated and was not seriously injured.  Firefighters remained on scene to assist the Fanwood Rescue Squad.  The driver was then transported to the hospital where she was treated and released.

3/21/13 - Once again, The Knights of Columbus, Father John S. Nelligan Council, No. 5730, held their annual award ceremony in which they take the time to recognize members of the local emergency services.  This year, firefighters from both Fanwood and Scotch Plains were commended for their efforts in rescuing a mother and her 3 year old son from a house fire on Church Avenue in Scotch Plains on 12/18/12.  Upon arriving, Scotch Plains firefighters Dennis Hercel, Jr. and Matt Adams made entry into the smoke filled home where they discovered the woman and her child barricaded inside a second floor room.  They removed the two with the assistance of Fanwood Captain Frank Dietl and Firefighter Brian Piccola, who then commenced CPR on the unresponsive victims.  Neither the woman nor her son survived in what authorities later concluded was a murder/suicide.  Photos of the award ceremony are seen below. 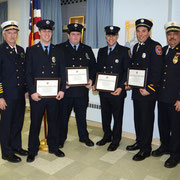 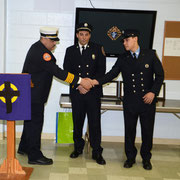 2/23/13 - A Fanwood crew responded to Garwood in Engine 8 for a 3-Alarm fire, where they worked at scene until the fire was extinguished. The photo to the left shows our men preparing to go back into the two-family residence with an additional attack line. Click here for a story and more scene photos on the Patch.

1/26/13 - Ladder 1 responded on a Mutual Aid request to Elizabeth for a 4 Alarm fire in a vacant apartment building across the street from Elizabeth's fire department headquarters.  Our crew initially spent several hours covering their firehouse, running alarms on their behalf.  They then went to the scene to assist in completing the knock down of any remaining fire.  Some additional information about the job can be found on NJ.com by clicking here.