12/17/11 - Santa Claus spent the entire day handing out presents to children all over Fanwood with the assistance of the Fire Department, Police Department and Rescue Squad.  Photos of this special day are provided below.

12/16/11 - 12/18/11 - The Fanwood Fire Department responded to three separate Mutual Aid requests in Plainfield over the weekend.

11/23/11 - At approximately 12:30 am, Engine 8 responded to a 4-Alarm apartment building fire on Elm Avenue in Rahway.  Our four man crew attacked the fire from the roof of the adjacent building until it was deemed under control. Photos of the incident are shown below.

10/19/11 - Due to strong winds, electrical wires fell on Chetwood Terrace and started a fire near a parked vehicle in the street.  The fire was extinguished once the utility company shut down the power.  A few short videos of the incident are provided below.

The New Jersey Union County Fire Chief’s hosted a Memorial display at Echo Lake Park in Mountainside during the entire weekend of September 11, 2011 to honor the 343 New York City Firefighters who made the ultimate sacrifice on 9/11/01.  This Memorial displayed 343 American flags, one for each FDNY firefighter who perished that day.  The Fanwood Fire Department was proud to sponsor one of the flags displayed at the Memorial.

Congratulations to Fanwood Firefighter Kristopher Piccola, who received an EMS Commendation from the Professional Firefighters Association of NJ. While on duty as a career FF/EMT with the North Plainfield Fire Department, he performed a life saving procedure on an 18 month old girl who wasn't breathing due to an airway obstruction.

9/13/11 - The Mayor and Council honored Fanwood's emergency responders for the work performed during Hurricane Irene.  Click on the image to the left to view the Resolution.

8/28/11 - Hurricane Irene came roaring through our area and left us with dozens of downed trees and wires as well as flooded basements throughout town.  The Fanwood Fire Department responded to our first call shortly after midnight, and by 10 pm later in the day we had reached over 100 calls.

Due to the shear scale of this storm, pursuant to the county's Office of Emergency Management, our primary focus was LIFE SAFETY.  When appropriate, we assisted numerous residents with shutting down their gas and electric until the water in their basements could be removed.  There was also a need to evacuate some residents due to trees that fell on their home and damaged the structure.

As many of you most likely heard, the strong winds resulted in transformer explosions.  Electrical wires were knocked down onto homes and into the street.  These wires pose an enormous risk to life.  Just because a wire is on the ground and is not obviously arcing does NOT mean that it is not energized.  Surprisingly, emergency service personnel found themselves having to tell people to stay away from these wires.  Please be sure to strongly caution anyone you see to stay away from these extremely dangerous conditions!!

Residents who purchased generators seemed to fare better during the storm.  The generators enabled them to maintain power to their sump pumps, refrigerators, and some lights.  Any resident who utilizes a generator must be sure to operate them properly since they do emit carbon monoxide - Please be sure to read the owners manual and follow all instructions.

A few photos from after the strom are below.

8/9/11 - Len Zuchowski, a member of the department for over 50 years, was honored by the Borough Council for his service to Fanwood.  As "Volunteer of the Month," Mayor Mahr presented him with a framed photograph of the Fanwood Train Station's Community House.  1st Assistant Chief John Piccola assisted the mayor in expressing everyone's gratitude. 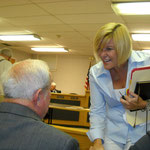 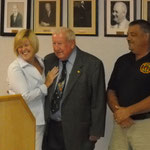 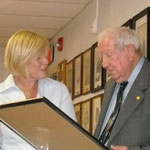 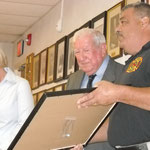 8/7/11 - Mutual Aid to Westfield...clink here for the full news article in the Patch

8/5/11 - Union County Fire Mutual Aid dispatched an Engine Company from Fanwood to Roselle Fire Department's headquarters for a cover assignment due to a 4-Alarm structure fire on St. George's Avenue. We were soon thereafter redirected to the scene, where we provided assistance in extinguishing the blaze.


You can also go to NJFiregroundPhotos.com by clicking here in order to view more photos from the job.

5/30/11 - Hundreds of Fanwood and Scotch Plains residents came out for the annual Memorial Day Parade.  Thank you to everyone for showing your support to our members!

5/5/11 - Shortly after midnight, Union County Fire Mutual Aid requested Ladder 1 to the scene of what turned out to be a six-alarm blaze at Ferraro's Restaurant in downtown Westfield.  Fanwood firefighters worked on the roof of the restaurant for the duration of the event, as seen in the photos below.  The cause of the fire was deemed electrical by investigators. 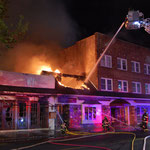 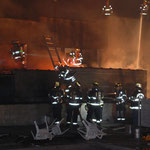 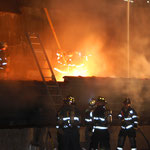 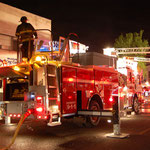 5/3/11 - Our department had the opportunity to train with firefighters from Mountainside and Warren at the Union County Fire Academy.  Safety officers from the Academy were present while evolutions involving fire suppression and search & rescue were conducted.  Here are some photos prior to the "Live Burns" beginning.

4/23/11 - Fanwood's firefighters and their families, as well as residents of The Chelsea and the borough gathered for the annual Pancake Breakfast Fundraiser.  As always, the department is extremely grateful to The Chelsea for their generous support over the years.  A great time was had by all!

3/18/11 - Congratulations to Fanwood firefighter Doug Germinder, who was recently promoted to the rank of lieutenant with the Plainfield Fire Department.  Seen with Doug in this photo is Jason Lowrey, who was previously a firefighter in Fanwood.

3/12/11 - Engine 8 responded to the intersection of Terrill Road and Midway Avenue due to a head-on collision between two vehicles.  One of the involved drivers was removed from his vehicle and transported to the hospital.  The other driver refused medical attention at the scene.

3/5/11 - The Cub Scouts from Pack 4, Den 6 visited FFD’s headquarters for a lesson on fire safety and a tour of Ladder 1. Fun was had by all! Their mission when leaving was to have a family meeting and develop an escape plan in the event of a fire at home, which we recommend to all families in our community. The scouts and their siblings did not leave empty handed – they all received plastic fire helmets, badges, magnets and pencils.

3/5/11 - Our department was invited to participate in a drill at an acquired structure in Watchung. Ladder 1 was used to access the roof where firefighters were able to train in various ventilation techniques. Our thanks to the Watchung Volunteer Fire Department for giving us the opportunity to hone our skills.

2/16/11 - Congratulations to FF Bruce Padulsky (on left, seen with Capt. Frank Dietl and FF Dave Zawodniak) for being honored by the Knights of Columbus for having the highest percentage of responses to calls in 2010!  The ceremony was held at St. Bartholomew's Church.  We also extend our congratulations to the other emergency service personnel from Fanwood and Scotch Plains who were honored that evening.

2/16/11 - Fanwood Firefighters responded to Plainfield in Ladder 1 for a four-alarm fire at an apartment complex on Front Street at approximately 1:45 a.m.

Click here for the Patch article concerning the Plainfield fire

1/15/11 - A chimney fire caused a heavy smoke condition inside a residence on the 100 block of Russell Road.  Responding fire units laddered the roof and utilized chimney flares in order to extinguish the blaze.  A build up of creosote inside the chimney was the apparent cause.  Residents are reminded to have an annual inspection/cleaning of their chimneys in order to avoid this type of occurrence.  Photos of the scene are provided below.

1/8/11 - Fanwood firefighters responded to a report of a heavy smoke condition on the 100 block of Hunter Avenue on Saturday morning.  The homeowner had been sleeping and was awoken by the smoke detectors.  The cause appears to have been due to a malfunctioning of the furnace motor.  The fire was quickly extinguished and was confined to the furnace area in the basement.  Two Fanwood police officers and one firefighter were transported to the hospital by the Fanwood Rescue Squad due to smoke inhalation.

Please click on the Fire Prevention tab at the left for more information about winter fires.