12/15/12 - Santa Claus rode around our town, on both Ladder 1 and Engine 7 (which was adorned with Christmas lights this year) visiting hundreds of good boys and girls.  We are happy to report that no coal was handed out!

12/1/12 - Engine 7 responded to a two car motor vehicle accident at the intersection of Westfield Road and Morse Avenue, which resulted one of the vehicles rolling over onto a neighboring property.  Once the vehicle was stabilized, the driver was removed and transported from the scene by the Fanwood Rescue Squad.  The driver of the other vehicle was transported from the scene, as well.  The Scotch Plains Fire Department also responded and assisted, since the accident occurred at the town border.  Photos are provided below.

10/29/12 - Hurricane Sandy struck our area with heavy winds that caused numerous trees to fall.   There was damage to many homes and autos, as well as downed electrical lines and utility poles that left the entire borough without power.  The Fanwood Fire Department responded to approximately 75 calls related to this event, while also working alongside the Police Department and Rescue Squad in keeping residents informed of updates by going door to door.  Some photos of the damage are seen below. 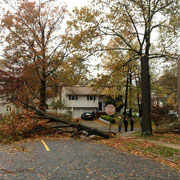 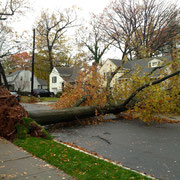 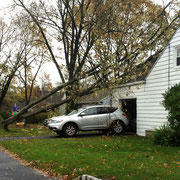 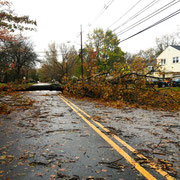 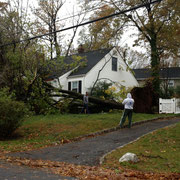 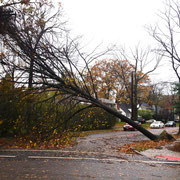 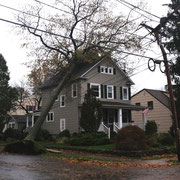 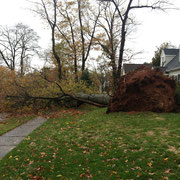 10/21/12 - A contingent of Fanwood's bravest participated in this year's Fanwood 5K, while Ladder 1 was on hand to display the American flag along the route.

9/30/12 - Ladder 1 was stationed at the corner of La Grande and South Martine Avenues for Fannywood Day 2012.  Tons of families stopped by to tour the truck, meet the firefighters and pick up lots of our great handouts (pencils, fire prevention coloring books, magnets, water bottles, etc.).

9/29/12 - During the early morning hours, Engine 8 responded on a direct request from Scotch Plains FD to a confirmed structure fire on Mountain Avenue.  Our crew assisted in suppression efforts at the second and attic level divisions until the fire was deemed under control.

8/7/12 - Ladder 1 and Engine 7 made an appearance at Fanwood's annual celebration of National Night Out.  Children of all ages climbed aboard the apparatus and checked out all the tools/equipment that firefighters use day in and day out.  Our firefighters also subjected themselves to more heat (after the Coriell Ave fire that morning) while serving hot dogs alongside the Fanwood Police Department.

8/7/12 - At 5:52 AM, the Fanwood Fire Department was dispatched to a house fire on Coriell Avenue.  The first fire unit arrived at 5:57 AM, and Engine 8 was on scene and stretching lines at 6:06 AM.  The residents were not home so entry was forced through the front door.  The fire was seated in the basement and had apparently been smoldering for a couple of hours before flames broke out.  The fire was contained to the basement with slight extension to the kitchen area. The fire was placed “under control” by 6:35 AM.  Fanwood Fire was assisted at the scene by Scotch Plains and Westfield Fire Departments. No injuries were reported; however, two cats were rescued by Fanwood crews and treated by the Fanwood Rescue Squad before being taken by family members to local animal hospital.

8/2/12 - Engine 7 responded to the parking area behind PNC Bank in downtown Fanwood due to a motor vehicle that crashed into several parked cars before being driven was up onto a retaining wall.  The vehicle was stabilized before its driver was removed.  Pictures of the scene are below.

7/31/12 - Fanwood FD hosted neighboring departments, including Scotch Plains, Garwood, Berkeley Heights and Summit, for a seminar held by Timothy Meade of NJ Transit.  Mr. Meade is a senior training specialist for NJ Transit's emergency preparedness/emergency response division.  The purpose of the presentation was to provide instruction on how to respond appropriately in the event of an emergency on one of the rail lines that pass through our towns.

7/31/12 - A 48 inch water main broke on Portland Avenue, a border block between Scotch Plains and Fanwood, resulting in a massive release of water in the neighborhood.  Water service was temporarily interrupted in our communities.  As the event unfolded, Chief John Piccola and 1st Asst. Chief Dave Zawodniak were present at the scene in order to stay apprised of the repairs while also making sure that arrangements were in place for water supply in the event of a fire.

7/23/12 - Our department conducted a joint drill with Scotch Plains FD as a means of ensuring that all members are familiar with each others' apparatus.

7/17/12 - 2nd Asst. Chief Steve Szanto and Firefighter Ken Gorman attended the 2012 Firehouse Expo in Baltimore, MD, where leaders in the fire service provided expert tactical training in various areas.  FF Gorman is seen in the photo to the right.

7/9/12 - The Fanwood Fire Department conducted a lecture and demonstration for the Scotch Plains Police Academy - Class of 2012.  Chief John Piccola and FF Kris Piccola conducted a 25 minute seminar on vehicle extrication, scene and personal safety, and apparatus placement.  Outside they were joined by FF Brian Piccola and proceeded to tactically disassemble an acquired vehicle.  All members of the Junior Academy got a close up view of the vehicle and extrication tools.  We wish to give special thanks to Officer Jerry Brown and Sgt. Luke Fuggett of the Scotch Plains Police Department for the opportunity to do this!  Photos from the afternoon are provided below.

6/20/12 - Ladder 1 responded on a direct Mutual Aid request to Short Hills Lane in Scotch Plains for a two alarm structure fire.  Firefighters were met with heavy fire conditions upon arrival, however, it was quickly knocked down and the residence was saved.  Some photos from the scene are provided below. 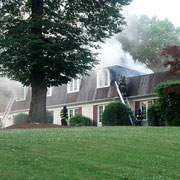 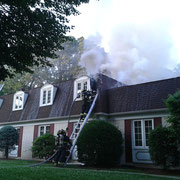 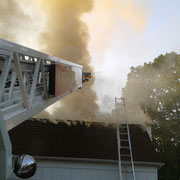 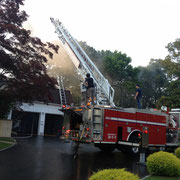 6/6/12 - Ladder 1 responded with a crew of five men on a Mutual Aid request to Plainfield.  The call was initially for a cover assignment at their headquarters on Central Avenue, however, we were soon thereafter directed to the scene once the fire went to a second alarm.  Our primary role involved assistance with roof operations and overhaul.  One photo below shows the structure once the fire was knocked down, while the other shows the Fanwood and Springfield Rescue Squads providing rehab to our men. 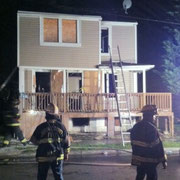 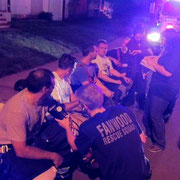 6/5/12 - Our newest firefighter, Ken Gorman, graduated this evening from the Union County Fire Academy.  The graduating recruits were escorted into the ceremony by the Union County Pipe & Drum Band, along with the Chiefs of the various fire departments and local officials.

Firefighter Gorman completed the Academy in the Fall of 2011.  For his outstanding excellence in the academic portion of his training, he was awarded the Ken Nocera Memorial Award.  In addition, his fellow recruits honored him with the first ever Ben Laganga Leadership Award.  Mr. Laganga passed away early this year after serving as Union County's director of emergency management for nearly two decades.  The Laganga family was on hand to present the award. Photos of the event are provided below.

In addition, for an article with further information about FF Gorman's achievement...Click Here!!

5/28/12 - Another beautiful holiday started off in the morning at the Memorial Day ceremony held at the Fanwood Library.  Our members then marched in the parade along Park and Martine Avenues followed by Engine 3, Engine 8 and Ladder 1.  Some photos of the day are provided below. 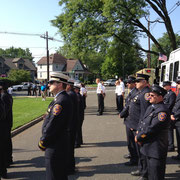 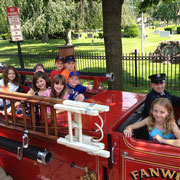 5/19/12 - Engine 8 responded to Westfield on a Mutual Aid request for what turned out to be a 3 Alarm fire on Barchester Way.

Click here for the full story on The Patch

5/14/12 - Just before 4pm, the driver of a pickup truck lost control while traveling eastbound on La Grande Avenue at/near its intersection with Beech Avenue.  The vehicle struck the curb and flipped over onto its roof on the rear lawn of the Children's Specialized Hospital property.  The three adult males and one male child were miraculously uninjured and were able to get out of the vehicle without being extricated.  Photos are provided below. 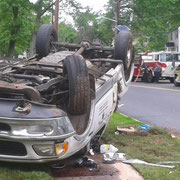 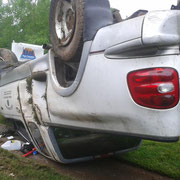 4/6/12 - Thank you to the residents of Fanwood and the surrounding towns for generously showing your support during our Annual Coin Toss.  Your support will allow us to continue to purchase much needed gear and supplies that are needed for completing our mission safely and successfully!

3/10 - 3/11/12 - On Saturday afternoon, Fanwood firefighters responded to Linda Place for a report of a kitchen fire.  The initial arriving Chiefs reported a heavy smoke condition in the residence.  The fire was quickly extinguished and was confined to the stove area only.  The cause was unattended cooking.  There were no injuries.

Later that same evening, Ladder 1 responded on a mutual aid request into Plainfield for a cover assignment.  A short time after returning, a residence on New York Avenue in Scotch Plains experienced a basement fire and Ladder 1 manned SPFD's headquarters until the scene was cleared.

Then, during the early morning hours of 3/11/12, Ladder 1 responded on another mutual aid request to Sumner Avenue in Plainfield for a structure fire.  Among other duties, Fanwood firefighters assisted with forcible entry into the residence and ventilation.  Two photos of the scene are provided below, one of which shows our men on the ladder and roof of the home. 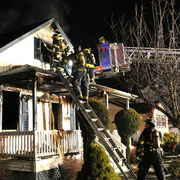 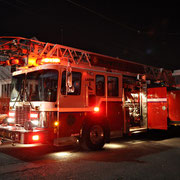 3/1/12 - At approximately 10:15 Am, Engine 7 was dispatched to a reported motor vehicle accident on Midway Avenue between North Martine Avenue and Russell Road.  A Honda CRV struck a tree head-on and sustained extensive front end damage.  The female driver was quickly and safely extricated by removing the front door of the vehicle.  The Fanwood Rescue Squad then transported her to the hospital for treatment.  Union County Haz-Mat responded to properly clean the scene before all units were released. 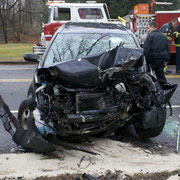 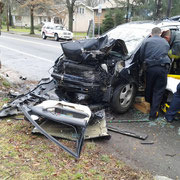 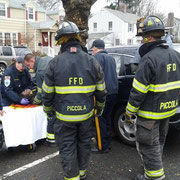 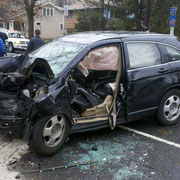 2/23/12 - The Knights of Columbus, Father John S. Nelligan Council, No. 5730, held their annual awards night at St. Bartholomew Church in which they recognized members of the Fanwood and Scotch Plains Fire Departments, Police Departments and Rescue Squads.  1st Asst. Chief Dave Zawodniak was among the honorees for his 30+ years of active service with our department.  Chief John Piccola was on hand to present him with the award.

2/5/12 - At approximately 6:30 am, Engine 8 was dispatched to the area in front of 141 Belvidere Avenue for a report of a fully involved car fire.  The driver, a newspaper delivery person, was unharmed and the fire was quickly extinguished without further incident. 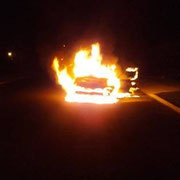 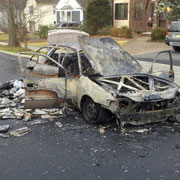 Click on the image to the right to view a thank you letter from Chief Thomas McNamara of the Elizabeth Fire Department for our assistance with the Berry Biscuit warehouse fire in late December 2011.

1/22/12 - Fanwood's Ladder 1 was called directly to the scene of what turned out to be a 6-Alarm structure fire at 439 South Avenue West in Westfield.  The aerial provided a master stream on the Westfield Avenue side of the property, while our remaining members handled multiple assignments on the fireground including cutting the roof on the fire building, checking for extension in neighboring structures, and working a hose line from within the exposure building at the rear.  Photos and a video of the incident are provided below.

1/1/12 - The new officers of the Fanwood Fire Department were sworn in by Mayor Mahr at the borough's annual Reorganization Meeting on New Year's Day.